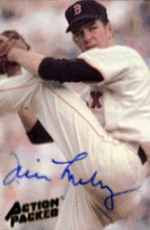 Born in Santa Maria, California, Lonborg graduated from Stanford University. He signed with the Red Sox as an amateur free agent in 1963 and it wasn't long before he made his debut with Boston in 1965. On May 10, 1965 at Fenway Park Jim got the start and pitched into the 9th inning before giving way to Dick Radatz who nailed down a 3-2 win for the rookie starter.

Jim Lonborg enjoyed seven seasons (1965-71) with the Sox, and is probably most noted for his magical 1967 season.

"No player in the history of the World Series, before or since, did what Jim Lonborg did in 1967," reported The Boston Globe. "Lonborg still holds the record for the fewest hits given up in back-to-back starts, when he was simply brilliant in Games Two and Five in the great Series with the St. Louis Cardinals that year."

Lonborg led the American League in 1967 with 22 wins, 39 starts and 246 strikeouts. That same year, he was named to the All Star Team and threw a complete game to clinch the pennant. He ensured the pennant by beating the Twins and Dean Chance on the last day of the season, the only time the Red Sox were in first place in a wild three-team race between the Red Sox, Tigers, and Twins. He also won the Cy Young award.

More than anything else, Lonborg led the Red Sox to their first trip to the World Series since 1946. In his first World Series start, Lonborg retired the first 19 batters he faced, taking a no-hitter into the eighth inning. He beat the heavily favored Cardinals with a one-hitter 5-0 to knot the Series at one game each. He lost the perfect game when he walked Curt Flood with two out in the sixth on a 3-2 pitch, then lost the no-hitter when Julian Javier doubled with two out in the eighth. Lonborg then tossed a three-hit, 3-1 victory in Game Five to give Boston a 3-2 Series edge. A Roger Maris homer in the ninth spoiled the shutout and Lonborg's 17-inning scoreless skein.

By the seventh game and on only two days' rest, however, Lonborg finally gave out, losing a 7-2 decision to Bob Gibson, who won his third Series game.

How did Lonborg describe his incredible 76 season and equally splendid playoff run? He said, humbly;

After the dream season, Lonborg was sadly, largely ineffective, winning just 27 more games for the Red Sox in the next four years. On December 24, 1967 he suffered a terrific fall while skiing and injured his knee. The 1967 Cy Young Award winner, 22–9 that great season, fell to 6–10 in 1968.

In 1971, Longborg was traded from the Red Sox along with Ken Brett, Billy Conigliaro, Joe Lahoud, Don Pavletich, and George Scott to the Milwaukee Brewers for Marty Pattin, Lew Krausse, Tommy Harper, and Pat Skrable.

He won 14 games after being traded to Milwaukee in 1972, then spent the remaining seven years of his career in Philadelphia. In 1974 he won 17 games, but the highlight of his season was a grand slam he hit on June 29 against Montreal, only his third career homer. He won 18 games in 1976 and went 11-4 in 1977 before eventually fading out two seasons later. He played his final Game on June 10th, 1979

Jim Lonborg was selected to the Boston Red Sox Hall of Fame in 2002.

After his baseball career came to a close Jim took the unusual step of enrolling in and graduating from Tufts Dental School, and is now known as Dr. Lonborg and runs his own dentistry practice in Hanover, Massachusetts.

The 63-year-old Dr Lonborg resides in Scituate with his wife Rosemary. The two of them have six children, ranging in age from 23-35, and one grandchild, with another on the way.


This Top 100 Red Sox of all time profile was written by Cormac Eklof @ ''I didn't know there was baseball in Ireland?!''

Anonymous said…
Dr. Lonborg has been the only celebrity I've interacted with in my life to date. He looked at my teeth after my husband (whose family in Scituate we were visiting) hit me in the mouth with a baseball, of all things. I can confirm that "Gentleman Jim" is just the right nickname for him.
9:15 PM

Marek T. Lipinski said…
Has the list already been compiled? Or do the authors take turns to nominate players?
10:23 PM

Cormac said…
I would love to meet him some day he seems like a really cool guy.

The list has indeed been compiled already, and is being released a couple of players a day on the site!
11:04 AM