Ireland travelled to Germany in 2004 for their fifth showing at the Pool B European Championships. The team was well coached, trained hard and had high expectations of getting in amongst the medals this time round, in only the organisations eight year of existence. To get to the playoff round they had to first handle Serbia Montenegro in the group games. This excerpt from my book on Irish Baseball breaks the game down for you like a fraction.

From 'Pitching in - ten years on the Irish baseball team'

''Crunch time followed. The game against the Serbian team took place a two hour drive away in Feurth, back where had started the trip with the friendly victory over the home town club side the Pirates. Taking the mound for the Irish, David Callaghan. Rooming with David for the tour I knew he was focused and ready for this game from the moment he woke up. 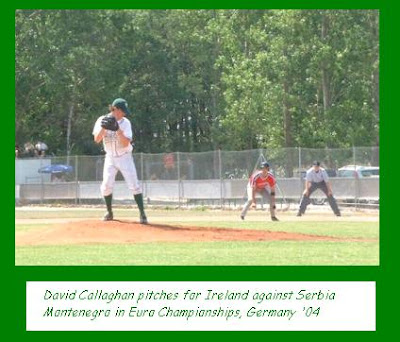 He was poised, threw his fastball hard and his curve ball had a wicked bite to it. There have been some amazing performances from pitchers in the Irish Jersey. Bill Beglane over Portugal in ’98. Bergerson against the Finns at the start of this tournament. Brian Morris against the Lithuanians in Sweden ’02. For me though, this was the most commanding, assured and confident performance ever. David was simply in control for the whole game. He threw a complete game, scattering six hits over nine innings striking out eight and inducing an amazing twelve ground ball outs, showing how in command he was over the Serbian batters.

He never looked in any trouble at all as he led the Irish team into the semi finals. David led us through the door that Kevin Corrigan kicked open. The game was tied in the eight at 3-3 with Tom Kelley on first base when K-Co blasted a two run shot, providing the final margin of 5-3 to the Irish.''


The games listed so far: